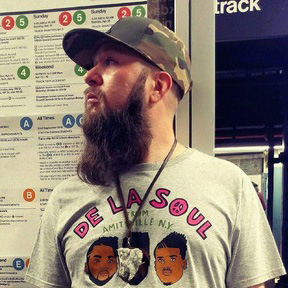 Next Time you take a look at a Map of the U.S. point directly in the middle of it, and there is where you will find, Hometown hero, Denver, Colorado wordsmith, DENT.

Just Like His name, this charismatic freestyle fanatic has been paying dues and leaving marks in the Hip-Hop Indy Scene since the early 90’s. Carrying the traits of a true MC, this Hip-Hop advocate has traveled from London to Japan, leaving many DENT’s on the ears that have been listening and following his music movement. In 2005 he released a international EP Release on Vinyl ‘Platinum in the Shower’ , that got a good buzz in The U.K. DJ Market. He followed up with his first LP in March, in 2008 a five year music collection, he calls, ‘Confi’DENT’ the LP. In 2009,He pushed out a mix CD with DJ Unison called, ‘The Greatest Songs U Never Heard’. In 2011, DENT release a Funky LP Called ‘AL BASHU’ He is constantly staying involved with his Hip-Hop community, recording,traveling, booking & hosting events coast to coast. As well as being a father to 3 kids, chasing his B.A. in Marketing and carrying on tradition of the Classic traits of The Hip-Hop Culture to The Mile High City, this Professional Big Kid stays extra busy! The style of music he posses is a reflection of the golden age of Hip-Hop. Dope Beats, Dope Rhymes, and all around good vibes. He has graced many stages, with many Hip-Hop icons, from Nas, Mos Def, The Roots, KRSONE, Dela Soul, REDMAN, Common,MC Supernatural, and many others. He’s reached many plateaus of success throughout the years and continues to be passionate, humbly driven about his music. With so much love and respect for the culture, this party rocking MC can not be denied.. Always makin music, coordinating events, Makin’DENT’s in his Hip-Hop community!