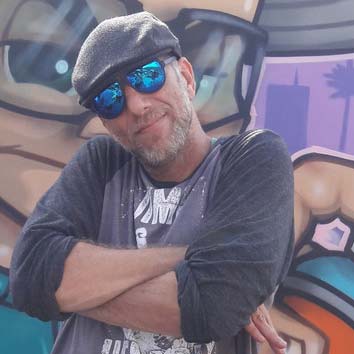 Frankie D is on a mission for street dancers to get paid and be respected. Street dancing hasn’t always had the attention it has now with television shows like “World of Dance,” “So You Think you Can Dance?” or online platforms where dancers can showcase their skills. These avenues have made street dancing more visible; however, this visibility hasn’t necessarily come with steady income or accolades for many dancers.

As a veteran dancer who was introduced to hip-hop and dance in the early 1980s, Frankie D has seen the evolution of the hip-hop arts in Los Angeles. Hailing from Orange County, he started off with ambitions of becoming a pro surfer and was also immersed in the Ska movement and Punk music scene. In his teens he was introduced to funk music and street dances like Locking and Popping and he never looked back. Frankie D was one of the few white faces coming up early this movement at the time. He learned about the music and dance from his peers, who embraced him.

He was immediately drawn to these communities that were flourishing before hip-hop took off in Los Angeles. In addition to hip-hop, Frankie D found influences in Bossa Nova music and dancers like the Nicholas Brothers and Fred Astaire. In the 1980s, Frankie D went to all the popular clubs and dance spots during that time, including Uncle Jamm’s Army, Jam City and The Palace.

His career as a dancer literally reads like a timeline history of street dance in Los Angeles. He started off with Locking, one of the first street dances in L.A. created by Don Campbell. Then in the early 1980s, Frankie D befriended influential dancer Adolfo “Shabba Doo” Quinones who was a member of The Lockers and went on to co-star in the “Breakin’” movies. As Frankie D developed and grew as a dancer, he continued to frequent the popular clubs and met more and more dancers.

By 1986 the Party or Trendy scene was emerging amongst black teens in Los Angeles, and Frankie D was there for it. The Trendy era was shaped by dance events like Ultrawave and dance groups like The Romeos, The Teasers and The Nasty Habits. The Trendy scene was defined by the fashion – shoes like creepers and suits and music choices like freak beat which were sped-up songs by Afrika Bambaataa and Kraftwerk. Out of this dance community emerged many of the hip-hop dances people still do to this day.

Frankie D breaks down the three eras of 1980s party dances in Los Angeles. “The first era was all about the gear. It was about the clothes. It was like the Fila, the Guess, the Reebok those were few of dances. That was the first era,” he explains.

“The second era of the party dances were the movies, it was the Cabbage Patch, The Transformer, the Running Man, the Pee-wee Herman, the Roger Rabbit. And then third era which came a little later, which they called the New Jack. Like the New Jack swing, BBD [Bell, Biv, DeVoe] and that cross your legs and pumping and pushing, that was the New Jack era.” Although these dances may be considered to be old school, they still largely influence pop culture and are part of the foundation of hip-hop dance.

As hip-hop music exploded in popularity in the early 1990s, this unexpectedly affected the street-dance communities in Los Angeles. As hip-hop music and specifically gangsta rap in L.A. became dominant street dance, and a space for dancers with music artists were crowded out.

Frankie D and other dancers found it hard to find their place in the changing hip-hop culture landscape that no longer valued dance. Gone were the days of Uncle Jamm’s Army or clubs like Water the Bush. As hip-hop music changed the dance community was also affected.

“Every rapper had dancers up until the early ‘90s. And then in the ‘90s, if you notice that Snoop Dogg didn’t have no dancers, Nas didn’t have no dancers, etc. If they did it was just girls shaking their booty,” Frankie D says.”They just kind of went into that route. And we got pushed into like either R&B… they went to dance for Aaliyah, Missy Elliott [or] Usher.”

Despite the limited opportunities for dancers, in the 1990s Frankie D secured commercial work through a dance agency and appeared in commercials, TV shows and music videos. As he made his way through the industry, he used his influence and as he says, “his whiteness” to open up doors for other dancer friends in Hollywood.

Before injuring his knee, he had already tried his hand at writing raps and performing hip-hop music. But after he learned recovery from his injury would be difficult he delved further into becoming a better rapper. Also, being in Hollywood circles with entertainers, he was encouraged to and tried out stand-up comedy. Although these two ventures didn’t pan out as expected, dance always seemed like his passion that he would boomerang back to.

By the 2000s, Frankie D picked up a camera and documented the current street-dance scene. He worked with The Rejects who were the forerunners of the Jerk movement. Even with a new generation of dancers, Frankie D could see how street dance took a backseat to music and didn’t get the respect it deserved.

He believes that dancers have always been the influencers in pop culture. And on the forefront of new trends and styles, yet never getting the credit for it.

“[For every] era dancers have always been the pioneers of look. They always had this different look than everybody else that accented the way they danced. The poppers had their look, the hip-hoppers had their look. But the look is very, very important.” Frankie D continues, “From the hairstyles, to the shoes to the way they wore their jackets. The fashion industry made a killing from it. Look at what the b-boys did with the fat laces… just the sneaker trend period. They were way before athletes. They brought in the Adidas and Pumas way before even Run DMC took it because the b-boys were so into it. So, the b-boys actually pioneered the sneaker trend.”

From Madonna’s “Vogue” craze in the 1990s – which was already a part of ball culture in black gay clubs – and pop stars from Taylor Swift to Chris Brown regularly using street and hip-hop dancers in their shows and music videos. Over the the last few decades it is clear that dancers’ style and fashion fueled music artists, who pass this trend along to the masses as their own.

Frankie D is advocating for dancers to have their own voice, like other entertainers and athletes. This would include their own fan base, sponsorship deals and endorsements. It will take hard work and will be a long road to get dancing to the prominent of other sports and entertainment, but with Frankie D’s passion, he just might make it happen.