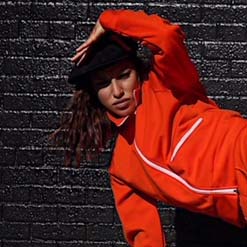 Ladie One was introduced into Hiphop Culture at the age of 13 years old, She learned to dance two years after she started Graffiti Writing. She has been B-Girling for 13 years and a Graffiti Artist for the past 15 years. She was initiated into one of the most respected all Female Hip-Hop crews called Heartbreakerz in 2010.

She has traveled the world painting, teaching, competing and judging. In 2013 Ladie Was awarded the first ever Cypher Queen Trophy At Outbreak Europe. Two Years following she won the international IBE Bgirl battle with a fellow Crewmember. In 2015 Ladie One was put down into one of the world’s most respected Graffiti crews, IBM. (Idolized By Millions)

Ladie One was 1 of 10 artists chosen nationwide to be in the first ever Reality TV show about Street Art and Graffiti Artists. She was apart of Oxygen’s TV Show Street Art Throwdown which aired in February 2015 on Oxygen and Bravo. Following the show, Ladie One amongst 4 other cast members painted for the TV show at the Super Bowl in 2015. She has painted for music videos, commercials, TV shows and Films including Dance moms, T-mobile, Netflix and many more. She’s been highlighted in Redbull photography for her dance and art and Ft. on LA street art Gallery for her Mural projects in LA. In July 2016 Ladie was a featured artist for Comic Con and an exclusive Warner Brothers party in San Diego, CA. She has Been Featured in many Art Shows, Galleries and Expos and continues to spread her love for her art and dance through Workshops, Judging and Arts Envoy Programs worldwide teaching kids and adults from all ages.

Since her big move to Los Angeles, Ladie has been Ft. Dancing With TMobile, Adidas, Nike, and artists like Chris Brown, Tyga, Wiz Khalifa and many more.
She’s now a Mom and full time entrepreneur making a living on her Art, Dance and Lifestyle.