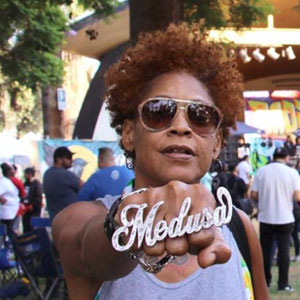 “In one of the rooms in the hip-hop culture house engraved on the walls” Is a live account of the 1 Super Soul Sista, who has the blessing to be dubbed “the Angela Davis of hip-hop”. Starting off MCing as a 16- year old pop-locker, Medusa continues to cultivate hip-hop seeds across the country in unprecedented numbers.

The love of hip-hop encouraged her to follow higher callings than her knowing. Pop-lockin with the Groove-Atrons gave her talents a platform to win the Beset Female Dancer in the 1st Hip Hop Dance Awards at The Palladium. “Medusa has been compared to a medley of amazing artist” Including, Gil-Scott Heron for their ways of expressing the revolutionary state of mind, Chuck D. (imagine a female Chuck D.), Lauryn Hill for having the ability to posses an international talent in the voice world and like the Game, who’s a versatile heavy hitter on speaking his life’s truth’s, Medusa gives you the key to real truth and allows you to feel it and even though the comparisons could go on, Medusa is on a Goddess list of her own.

You will find no other who will bring it to you like this, someone’s music that makes you feel strong, proud, and encourages with the manner of ONE Love. “Coming up in the LA scene, she honed her skills” At the Good Life café and Leimert Park’s “Project Blowed” Workshop, around Freestyle Fellowship, Black Eye Peas, Macy Grey, and Xzibit, being the first in the LA hip hop scene with a live band. After blessing her already growing fans with her EP, “Do It The Way You Feel It”, Medusa gained an even stronger fan base overseas, in the country, on college campuses across the nation, and has virtually become a guru to the underground hip-hop scene and artistic community.

She is respected and adored as a Queen to the word and power of her music and what she stands for, not just the fact that she’s the undisputed Queen of West Coast underground hip-hop. “Medusa has shared the stage and opened for lyrical heavyweights” Such as: Stevie Wonder, KRS-ONE, George Clinton, Dead Prez, Dave Hollister, Chali 2Na of Jurassic 5, Super Natural. Public Enemy, Blackalicious, Erykah Badu, Roy Ayers, Dilated Peoples, Speech, Common, Pharoahe Monch, Meshell Ndeegeocello, Fishbone, MC Lyte, Bahamadia, and Blk Thought of the Roots. That’s not even including the blow up in Honolulu for the “Girl Fest,” a festival that dedicated an entire day honoring Medusa and her accomplishments in music.