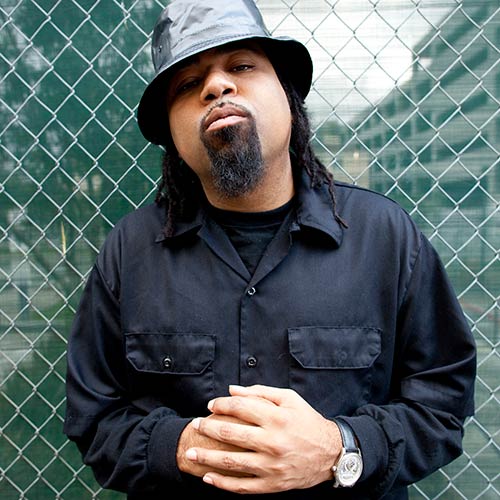 When you hear the name Rakaa (Iriscience), the first thing that comes to mind is likely Dilated Peoples -- the world-renowned Hip Hop group he founded with fellow MC / Producer Evidence in the mid 90’s.

What few people know is that behind the countless number of records sold, sold out concerts around the world and music collaborations that would make just about any artist jealous – Rakaa is more than just a Rapper. His passions stretch from creating and curating visual arts, to training Gracie (Brazilian) Jiu-Jitsu for many years, to traveling the world as a highly sought after Host and MC.

Born Rakaa Taylor in Los Angeles, California, Rakaa’s earliest memories of Hip Hop came in the shape of Rap music being played at birthday parties and on iconic AM radio station 1580 KDAY. However, it wasn’t until he heard Run DMC for the first time that he put it all together as part of a larger culture. “I was inspired by their raw energy,” says Rakaa about Run DMC, “…their subject matter and voices, the clothes, the beats, the flavor… It just felt right. It still does.”

That discovery launched him into the throws of the culture. Rakaa took to the Los Angeles Graffiti art scene painting with the Create To Devastate (C2D) crew, DJing with the legendary DJ Rob One (R.I.P.), writing poetry, freestyling, and even dabbling in a little poppin’. He was the definition of a Hip Hop renaissance man, soon joining legendary Hip Hop collective Rock Steady Crew as a Graffiti artist and MC. Helping in the initiation of their L.A. extension – the L.A. Bomb Squad; he was also a founding member of the crew’s West Coast chapter.

Rakaa released a solo album (2010’s critically acclaimed Crown Of Thorns), and he partnered with DJ Babu (Dilated Peoples / World Famous Beat Junkies) to form the classic yet
progressive party-rocking duo Expansion Team Soundsystem. Additionally, Rakaa has hosted corporate and private events worldwide, co-owned and hosted the legendary Nightlife parties with The World Famous Beat Junkies, worked in radio and television, done narration and voiceover work, done multiple speaking engagements at universities; served as a board member, regular panelist, and host for the Hip Hop Chess Federation; was a special guest performer at the R16 Korea Sparkling Incheon B-Boy Championships; and served as host and MC for the Red Bull BC One B-Boy World Championships in Johannesburg, Paris, Moscow, Nagoya, and Amsterdam – as well as other BC One events in San Diego, Chicago, Houston, and Honolulu.

Whether it’s rocking a stage, writing, training on the mat, navigating the visual arts world, or engaged in business, it’s clear that Rakaa seizes and creates opportunities to turn his passions into realities. He is a force to be reckoned with in any arena.