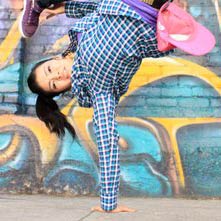 Emiko Sugiyama was born in Tokyo, Japan in 1980 and began dancing classical ballet at the age of 7. She moved to Davis, CA in 1999. She attended to study Physical therapy at University of California, Davis. Soon she met Michael Cagley, who he was her first Breakin teacher and became a part of MTS (Moving Through Space) first, then DVS, and Flexible Flave later on.

Emiko traveled to attended various breakin’ events to compete with her crew such as Bboy Summit, Mighty 4, Freestyle Session, BBoy Ho Down, and etc. While she lived in Davis, Emiko met Mikey Disko from Soul Sector when she went to see Rome and Julie by Rennie Harris Puremovement. Mikey and his crewmates introduced House and took her to clubs every weekend. Also Emiko met Tony T. from LA Breakers, and he trained her. In 2001, Emiko moved to Los Angeles to pursue her dance career, and she joined a hip hop dance company called “One Step Ahead” and performed in several venues. In 2004, She moved to NYC, and she became a member of Illstyle and Peace Production and had performed with them nationally and internationally such as Russia, Poland, Liberia and Canada for five years. While she lived in NY, she went to night clubs every day, became part of G.B.A (Guilty By Associations) and met Dance Fusion and Mop Top/ Elite Force Crew members. Also Emiko met a renown photographer Martha Cooper. Emiko asked Nemossis from Breakin Krew to be the mentor so that she can train to enter We Bgirl Battle in Brooklyn NYC in 20005. She could not win the battle, yet after Emiko was selected as a cover girl for Martha Cooper’s new book “ We B* Girlz”. In 2005, Emiko received O-1 Visa aka Artist Visa and moved to Philadelphia to work with Rennie Harris Puremovement and Illstyle and Peace Productions. In 2008, Emiko collaborated with SEMAAC (SouthEast Asian Mutual Assistance Association Coalition) to produce 7 weeks all elements Hiphop youth summer camp called Hiphop Island in Philadelphia. Emiko had been invited to compete breakin’ battles such as Mighty 4 in San Francisco, Temple O’ Style in Paris France, and B.Supreme in London UK. Emiko entered Top lock battle at Sandonomeshiyori Breakin (三度の飯よりブレイキン）in Japan and won first place in 2003, and she also competed House battle at Bboy Ho Down in 2005 and became best 4.

After Emiko had lived in East Coast for four years, she moved back to Los Angeles and married to SANO who he is a graff writer in 2008. She put her focused on catering towards local community because she finally settled in Los Angeles. She had produced and artistically directed the annual J.U.i.C.E Hip Hop Dance Festival at Ford Amphitheatre for four years. Today, Emiko has been dedicated to building a House community and created Open House that has a weekly dance session in Downtown Los Angeles since 2009. Emiko is a community builder, educator, professional dancer, grant writer and now a mother of a two year old boy. In 2013, she has received “ the most influential female Hip Hop contributor” award at LA breakers 30th anniversary and Community Leadership Appreciation from Lester Horton Awards by Dance Resource Center in 2016. ( her dance credit: Rennie Harris Puremovement, Illstyle and Peace Production, Justin Bieber, Rihanna, Cold Play, Fat Joe, KRS One, KOS, Thalia, and many more. Awarded Grants: Leeway Foundations, Dance Advance, Department of Cultural Affair, and Dance Resource Center).